Cuffay in the Northern Star

Cuffay was well known amongst his Chartist friends as a fine singer especially of humorous songs and there are a number of reports in the Northern Star of him entertaining the crowd at Chartist meetings as in the example below. 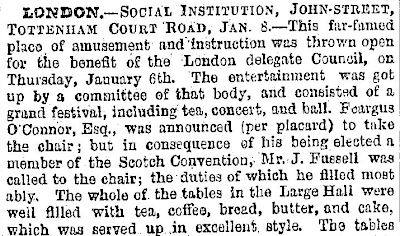 The Northern Star, Saturday, November 25, 1843; Issue 315. p.2
DRAMATIC ENTERTAINMENT FOR THE BENEFIT THE NATIONAL VICTIM FUND.
The members of the London Amateur Dramatic Society gave their first public performance in aid of the above fund, at the Royal Standard Theatre, High-street, Shoreditch, on Thursday evening, NOV. 16th. …
The amateurs were aided by several members of the "Standard Company," and by Mr. Cuffay, whose singing was warmly encored.


The Northern Star, Saturday, January 13, 1844; Issue 322. p.1
LIBERATION OF GEORGE WHITE
"A public festival, consisting of dinner, concert, and ball, was held on Monday afternoon, January the 8th, at the Political and Scientific Institution, to celebrate the liberation of Mr. George White, after eight months incarceration in the Queens Prison. ...
During the evening, Messrs. Cuffay, Simpson, Slater, and Allnut favoured the company with some excellent songs.
The Hall being cleared of the tables, &c., dancing commenced, and was continued with good spirit. The Hall was densely thronged throughout the evening."

Cuffay helped organise 'A Grand Festival consisting of Tea, Concert and Ball' to raise funds for the famous Welsh Chartists Frost, Williams and Jones who had been transported to Van Diemen's Land for their part in the Newport Rising in 1839.

John Frost Zephaniah Williams and William Jones were the leaders of a Chartist march and Newport and Monmouthshire, (now Gwent) in 1839. Although some of the participants were armed with home-made weapons, the basic intention was to make a peaceful protest. The five-thousand marchers arrived at 8.30 a.m. on 4 November outside the Westgate Hotel, where some Chartists were temporarily imprisoned. A scuffle occurred when a special  constable tried to take a gun from the demonstrators, a shot was fired, and then the soldiers who were concealed in the hotel, killing between then and twenty-two people.

The leaders were arrested and put on trial at Monmouth, some on charges of high treason. Frost Williams and Jones were sentenced to by hanged, drawn and quartered, though this was commuted to transportation for life. After serving fourteen years they were pardoned. Williams and Jones elected to remain in Australia, but Frost returned came home to a hero's welcome at Newport.  His spirit was unbroken and he published a vigorous pamphlet 'The Horrors of Convict Life' (Preston, (1856).

Broadside ballads have a documentary value, as I hope these examples demonstrate, in their printed form. It should be remembered, though, that they were mostly intended for singing: their words seldom take wing unless they are sung.