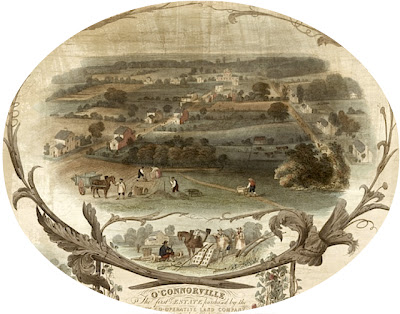 [Feargus] O'Connor reasoned that if lack of land and property excluded workers from full citizenship, then the Chartist movement should help them acquire land. Taking a leaf out of the capitalist book, he formed the Chartist Co-Operative Land Company (later the National Land Company), in which workers could buy shares, and the funds raised were to purchase land that was subdivided for housing. Shareholders chosen by lot were granted purpose-built homes in these new Chartist states that still stand in Oxfordshire, Worcestershire and Gloucestershire, O'Connor astutely judged that workers did not just want equality of rights, but aspired to the security and autonomy that came from owning a stake in society. While undermined by a parliamentary inquiry into its financial sustainability, mutual building societies like the National Land Company would be established in Britain and the Australian colonies in the second half of the nineteenth century. These societies purchased and subdivided land, constructed modest homes and lent money to working-class families. Land-hungry, home-loving, hard-working Chartist immigrants to Victoria and New South Wales would drive the colonies' home-ownership levels the highest in the world during the 1860s, '70s and '80s, laying the foundations for Australia's characteristic working-class suburbia.
Tony Moore, Death or Liberty, 2010 p. 201.

The Chartists had tried petitioning, they had tried the weapons of the strike, the mass demonstration, even an attempted rising. As the decade [1840s] proceeded they were turning to self-help of various kinds, trying against the odds of lack of means, alternating overwork and unemployment and the increasing presence of police and military in their communities, to set up their own institutions. The Land Plan provided an organising focus in all the localities. The estates as they were bought and put into operation seemed to provide islands of practical Chartism in the country. So far from diverting attention from the political movement, it was almost certainly the existence of the Land Company that kept the movement together, provided an additional reason for the regular reading of the Star, and offered a focus of activity beyond the discredited process of petitioning.
Dorothy Thompson, The Chartists, 1984 p. 306.

William Cuffay, a supporter of O’Connor, was to serve as auditor of the National Land Company from 1846 until 1848.

See also Frederick Engels - The Agrarian Programme of the Chartists