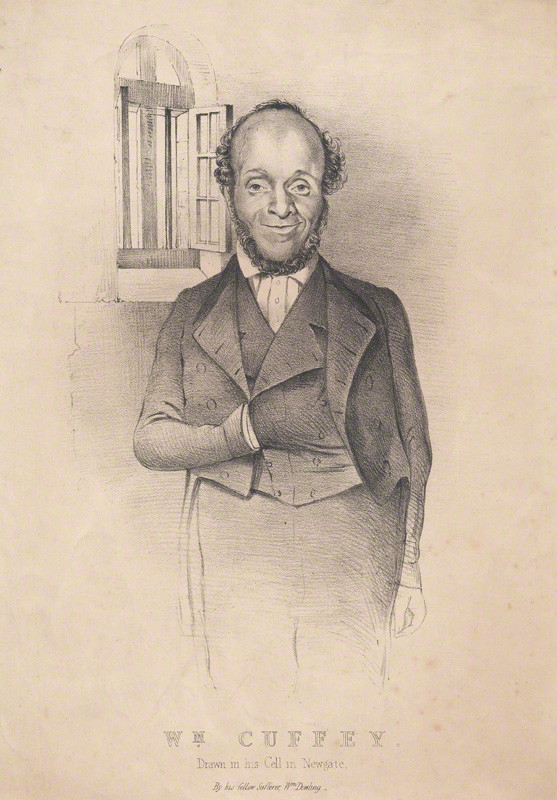 Drawn in his Cell in Newgate
By his fellow sufferer Wm Dowling
© Courtesy of National Portrait Gallery, London
Notes

Cuffay's fame in Australia preceded his trial and grew after he was transported to Van Diemen's Land where he quickly became an important figure in the Tasmanian labour and ant-conscription movements. Before the lithographic plate from which the National Portrait Gallery made the print above was the only known image of Cuffay was the one below, an inferior woodblock (and reversed !) reproduction: 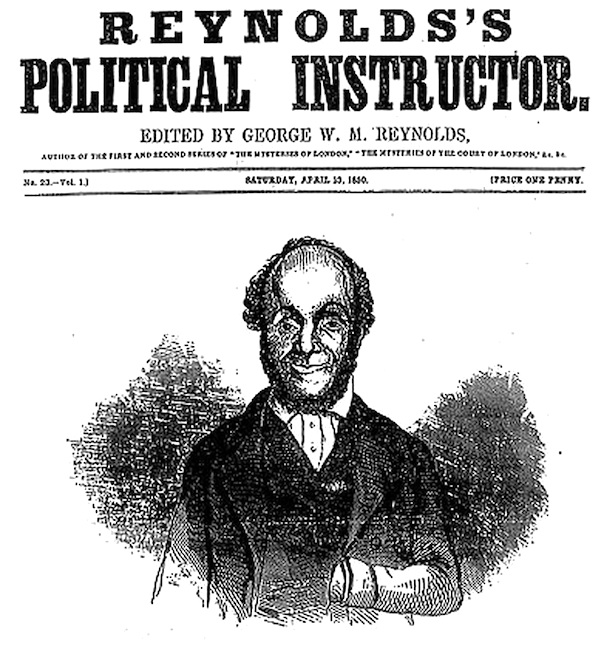 George W. M. Reynolds was like Cuffay a leading Chartist and publisher of the 'The Reynolds's Political Instructor' ... The issue above was published on 13 April 1850, a few months after Cuffay's arrival in Van Diemen's Land, where his Ticket of Leave allowed him to resume his trade as a tailor in Hobart. This is a mirror image of the original drawing in gaol by the Irish artist William Dowling.

The cell bars have been removed from the background. This was the only image we had of William Cuffay until the National Portrait Gallery received the original plate made from Dowling's pencilled sketch.

After the Suffragettes William Cuffay black leader of London Chartism should also be pardoned - February 7, 2018 by kmflett

On the centenary of the 1918 Representation of the People Act which gave women over 30 the vote, Home Secretary Amber Rudd said consideration would be given to pardoning Suffragettes jailed for fighting for the vote. Labour has committed to a full pardon when elected to Office.

In the context of the fight for the vote it must also be time to consider a pardon for William Cuffay, the black leader of London Chartism in 1848. Cuffay was arrested and sentenced to transportation to Tasmania.

William Cuffay was born in Gillingham in the Medway Towns in 1788, the son of a local woman and a former slave from St Kitts who had made his way to Britain by working on a Royal Navy ship. Many of those aboard Navy vessels in the late eighteenth century were black.

Little is known about Cuffay’s time in Medway- though research is being done.

We do know however that by 1819 Cuffay was in London and had learnt the trade of a tailor.

No doubt Cuffay would have been exposed to the radical working-class politics of London in the 1820s and he was certainly involved in the strike called by the Grand National Consolidated Trade Union in 1834.

Cuffay went on to become, by the end of the 1830s, a leader of a group of London Chartist tailors.

In 1840 Cuffay was 52- very old for a Chartist activist at that time- and he became a central and trusted figure in London Chartism.

The best way to understand him is as the key ‘backroom’ organiser of Chartism in the Capital- raising money for jailed Chartists and being appointed to oversee the funds of the Chartist Land Bank.

By 1842 Cuffay had been elected from London to the national Chartist Executive. These positions were fiercely contested, so Cuffay will have had a considerable constituency of support.

Details of Cuffay’s work in this period can be tracked in the Chartist paper, the Northern Star.

Martin Hoyles in a recent book on Cuffay has also revealed that during this period Cuffay was performing as a singer on the London stage.

Although research is still in progress it now seems clear that Cuffay was the organiser of the great Chartist demonstration on Monday 10th April 1848.

Chartists gathered at various points across London and marched south to rally at Kennington Common. The idea was then to proceed back across Blackfriars Bridge to present a giant petition for the vote to Parliament.

It was a strategic mistake- it’s unclear what part Cuffay played in deciding the venue for the rally. Police and soldiers blocked the way back over the River Thames and the national leader of Chartism Feargus O’Connor agreed with the police that the Chartists would not try to march.

Cuffay was understandably very annoyed at this decision and is reported as arguing that the march should go ahead.

We now know that there was hand to hand fighting between Chartists and troops on the south side of Blackfriars Bridge but a heavy April shower caused the attempt to be abandoned.

Later in the year, in August 1848, Cuffay was arrested for his part in an alleged revolutionary conspiracy at Seven Dials, Covent Garden. Arms were found in Cuffay’s house. His precise role in the events is unclear but it is very likely that as the London Chartist leader he was at the very least aware of what was planned.

Tried at the Old Bailey, Cuffay was sentenced to 21 years transportation to Australia.

Arriving in Hobart Tasmania, now over 60, Cuffay could have been forgiven for retiring from political activity. He did not. Instead he was active in a range of radical causes in the earliest years of the Australian labour movement. He was pardoned after 3 years but remained in Australia, dying in 1870.

Modern interest in Cuffay can be traced back to a chapter in Staying Power by the late Peter Fryer which recovered much of the history of black people in Britain.

Cuffay left no diary, autobiography or papers, but research to uncover details of his life and activity is continuing. There has been considerable effort in Australia and in Britain plans remain to erect a blue plaque for Cuffay in the Strand.

The Times in 1848 referred to Cuffay and the Chartists as ‘the black man and his party’ and we can now see that this was not hyperbole but a recognition that the London organisation of the world’s first working class movement was led by the son of an ex-slave from St Kitts.

Cuffay came from the imperial diaspora to challenge imperialism at its heart in London to find himself exiled to another part of the British Empire in Australia as a reward for his efforts.

It is surely more than time to recognise William Cuffay not as someone worthy of transportation to Australia as a convict but a key figure in the development of British democracy, just as the Suffragettes were 70 years later.