An Anthology of Chartist Literature 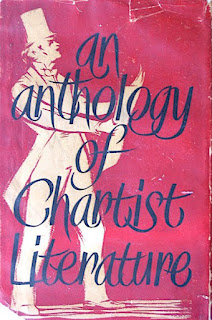 This essay is a translation by Joan Simon of the Preface to An Anthology of Chartist Literature (Moscow 1956), edited by Yuri V. Kovalev, a lecturer in English and American literature at Leningrad University.

At the close of the 1830's there arose in England a powerful workers' movement—Chartism, which V.I. Lenin characterised as 'the first broad, truly mass and politically organised proletarian revolutionary movement'. Those taking part in this movement called themselves 'Chartists', since they were fighting for the adoption in law of the Charter, a document drawn up by the originators of the movement. The Charter consisted of six points, the chief of which was the demand for universal suffrage.

The introduction of universal suffrage would not, of course, have brought complete emancipation for the English proletariat, as the Chartists hoped, but it might have prepared the ground for social revolution. Marx and Engels Particularly underlined the significance of the basic point of the Charter at this time: 'The introduction of universal suffrage would be, for England, a victory  embodying much more socialist spirit than any measure to which this honourable title is applied on the continent.'

By the mid-nineteenth century England had outstripped other countries in economic development. Large-scale capitalist industry was already in existence. The concentration of production, and correspondingly the concentration of the proletariat, had reached important dimensions. 'There exists in England', Wrote Marx and Engels, the most numerous, concentrated and classic proletariat.'

The English working class had acquired solid experience of economic and political struggle before the close of the 1830's. Participation in the fight for the electoral reform of 1832, and above all its outcome, had brought home that the interests of the working class were incompatible with those of the bourgeoisie. Hence arose the striving for an independent class organisation

This anthology, published by the Foreign Languages Publishing House Moscow, was announced as “the first attempt at a representative collection of Chartist poetry and prose to be published in any country.” The introduction and the comments by the noted lecturer at the University of Leningrad are in Russian, but the texts are not translated, so that “the British student of his own country’s past may well benefit from these researches of a foreign scholar.” The pioneering work is divided into four sections: poetry, novels, literary criticism, and speeches. Linton is represented extensively i.a. with an article on Russian republicanism from his English Republic, his poem from 1848 The Dirge of the Nations and some pithy examples of his cycle Rhymes and Reasons against Landlordism.
It is telling that the foremost political artist of the 19th century had his initial comeback with greetings from Moscow. But it would take another seventeen years until this return took on a more distinctive shape, this time with greetings from Canberra, Australia.