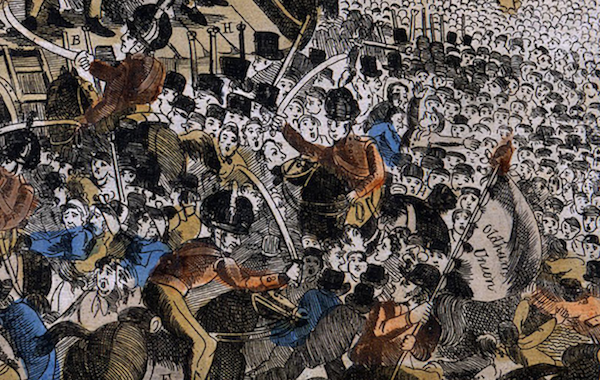 The Peterloo Massacre occurred at St Peter's Field, Manchester, England, on 16 August 1819, when cavalry charged into a crowd of 60,000–80,000 who had gathered to demand the reform of parliamentary representation.

The end of the Napoleonic Wars in 1815 had resulted in periods of famine and chronic unemployment, exacerbated by the introduction of the first of the Corn Laws. By the beginning of 1819, the pressure generated by poor economic conditions, coupled with the relative lack of suffrage in Northern England, had enhanced the appeal of political radicalism. In response, the Manchester Patriotic Union, a group agitating for parliamentary reform, organised a demonstration to be addressed by the well-known radical orator Henry Hunt.

Shortly after the meeting began local magistrates called on the military authorities to arrest Hunt and several others on the hustings with him, and to disperse the crowd. Cavalry charged into the crowd with sabres drawn, and in the ensuing confusion, 15 people were killed and 400–700 were injured. The massacre was given the name Peterloo in an ironic comparison to the Battle of Waterloo, which had taken place four years earlier.