On October 16 1849 The Poetical Works of Lord Byron was warmly inscribed by Cuffay's Westminster Chartist Association friends and shipped off to him just before he arrived in Van Diemen's Land. It is clear that this book was treasured by Cuffay as he took it with him 20 years later to the Brickfields Invalid Depot in Hobart Town. When Cuffay died in there on 29 July 1870 his book was placed in the Reading Room –  On 12 September 1870 as the hand written inscription inside the book below reveals. 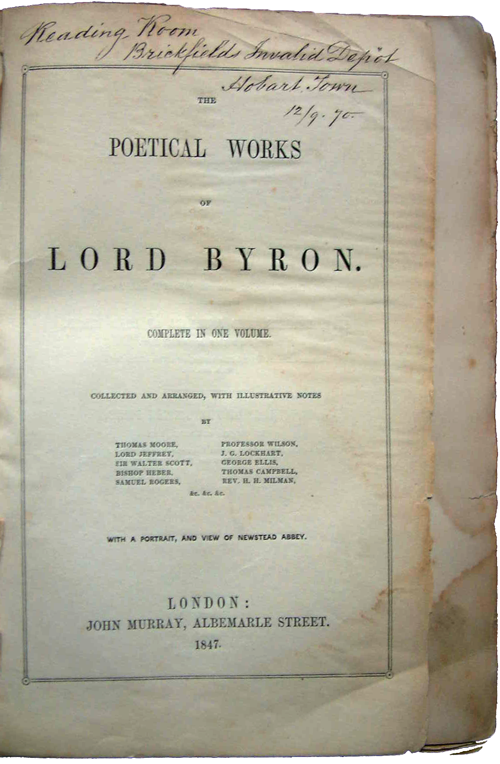 Recently the book turned up in England when a house clearance auction rooms in Gloucestershire sold a box of books. According to a letter tucked into the back, by 1975 it was in South Africa. The then owner was G.O.Owen of Sea Point near Cape Town.

Quite a return trip for an important fragment related to William Cuffay. It shows that his Chartist friends in England did not forget him, nor he them. There's a notable thumb print bottom right on p. 569. where one of the poems concerns the Luddites, a working class movement that Byron publicly shown sympathy for in his maiden speech in the House of Lords in 1812. 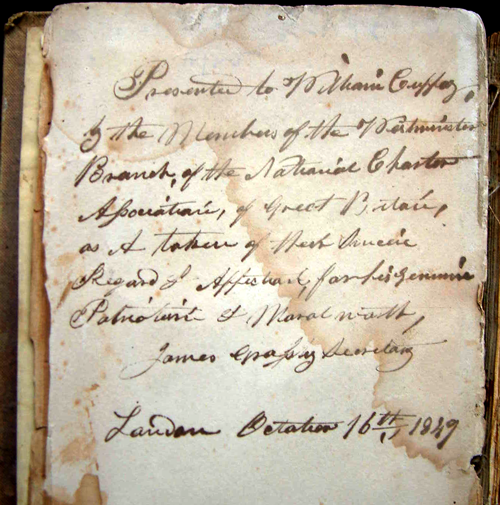 Presented to William Cuffey
by the Members of the Westminster
Branch of the National Charter
Association, of Great Britain,
as A token of their Sincere
Regard & Affection for his Genuine
Patriotism & Moral worth,
James Grasby Secretary

William Cuffay the entertainer 1842
For the ten years from 1838 to 1848 the authorities in Britain were faced with a popular movement which came nearer to being a mass rebellion than any other movement in modern times. Working people in all parts of the island – in Scotland and Wales as well as England – demonstrated in favour of a political programme, formed organisations to promote it and in many ways set up a whole alternative culture  and life-style in the process. A mass of published material was produced, newspapers, pamphlets, broadsides, placards and books were circulated, sermons were preached, plays and pageants performed, hymns and songs were written and sung. Traditional forms were adopted alongside new forms of organisation and demonstration.

Dorothy Thompson in preface to The Chartists (1984)

William Cuffay accuses his prosecutors at the 1848 trial

I say you have no right to sentence me. Although the trial has lasted a long time, it has not been a fair trial, and my request to have a fair trial - to be tried by my equals - has not been complied with. Everything has been done to raise a prejudice against me, and the press of this country - and I believe of other countries too - has done all in its power to smother me with ridicule. I ask no pity. I ask no mercy. I expected to be convicted, and I did not think anything else. No, I pity the Government, and I pity the Attorney General for convicting me by means of such base characters. The Attorney General ought to be called the Spy General. I am not anxious for martyrdom, but after what I have endured this week, I feel that I could bear any punishment proudly, even to the scaffold.

(Cuffay quoted in the Times, 2 Oct 1848)
Chartism
…a UK parliamentary reform movement of 1837–48, the principles of which were set out in a manifesto called The People's Charter and called for universal suffrage for men, equal electoral districts, voting by secret ballot, abolition of property qualifications for MPs, and annual general elections…
Oxford English Dictionary