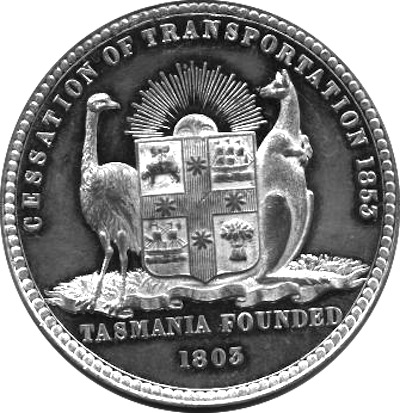 Transportation to Van Diemen's Land ended in 1853 and the new name chosen for the colony was Tasmania.

The fact of working-class agitation against transportation is clear from Tasmanian newspaper reports of meetings in Launceston and Hobart in the 1850s. Wage workers being in the main ex-convicts or children of convicts, knew the convict system like nobody else. They knew that convict labour held down wages and threatened labour conditions. They knew that the master and servants laws were being toughened up in the employers favour to keep them shackled to employers through threat of draconian fines and imprisonment.

The Colonial Times reported a meeting in February 1851 organised by the Tasmanian Free Trades Union to discuss transportation. At this meeting William Cuffay "was unanimously called to the chair, and opened the meeting with a brief address, developing the principal objects of the meeting".  Cuffay was on his way to becoming an important spokesman for Tasmanian workers.

Middle-class concerns about transportation were marred by hysterical fear and loathing of the victims of the convict system, under the guise of moral and religious concerns - the convict stain. Workers concerns were based on the need to defend and improve wages and working conditions and a moral concern that it was the convict system that was immoral. These two sections of society successfully worked together to bring transportation to and end. Organised workers continued to fight the master and servants legislation to remove its more draconian provisions, particularly the threat of imprisonment.

For generations after the end of transportation convict ancestry was deliberately hidden by government, religious institutions and families. Government convict archives were closed to researchers until the late 1960s when families began to discover and celebrate their convict ancestors. At the same time historians began to shake off notions such as "criminal class" that had been the fig leaf covering the real crime that was transportation itself.

Transportation can be seen as an early form of rendition, tearing able bodied young men and women from family, community and nation to build a new nation on a distant shore.