DEATH OF A NOTORIOUS CHARACTER.– Last week, at John-street Institution, Tottenham
Court-road, died Physical Force Chartism. The deceased had been in a very bad way some time ; and by his uproarious conduct gave very great uneasiness to many who otherwise were his well-wishers. The deceased has not been opened, which we regret, therefore there are many conflicting opinions as to the cause of his death. Some attribute it to a softness of brain, some to diseased lungs, some (the more amiable interpreters) to the misfortunes of several intimate friends, now undoing oakum in the House of Correction. We believe the desertion of Mr. Cuffey had a very serious effect upon the spirits of the deceased. It was thought, at least, that Mr. Cuffey would have closed the eyes of Chartism, and that Mrs. Cuffey would have laid him out. We regret to state that it has been otherwise. The deceased died almost
wholly neglected. It is still declared by some that he caught his death on the 10th of April, when, against the advice of his best friends, he would go to Kennington Common, where, it is thought, an alarm of the scarlet fever, latent in the neighbourhood, gave such a shock to his system, that he sickened from that hour. Nevertheless, he made frequent attempts to rally, and it is thought, that had his friends supplied him with funds, he might have lingered on for some time. For want of a shell, his remains were consigned to an empty money box, with a bad shilling nailed upon the lid, as a significant coffin-plate.–Punch.

–––––––––––––––––
In 1848 particularly Cuffay was lampooned in print, in newspapers like the Times, and the Observer, in magazines like Punch and the London Illustrated News. While he was in Newgate Gaol awaiting transportation Punch carried The Three Christmas Waits a lampooning poem by William Makepeace Thackeray. A book titled The Political Life of Cornelius Cuffey, Esq., Patriot, &c, &c., was on sale for half a guinea. It consisted of a poem that was lavishly illustrated with hand-coloured lithographed plates protected by tissue guards, and claimed  to have been "Printed for Sale at the Bazaar in Aid of the Governesses' Benevolent Institution". This organisation was an invention of Punch in 1846. 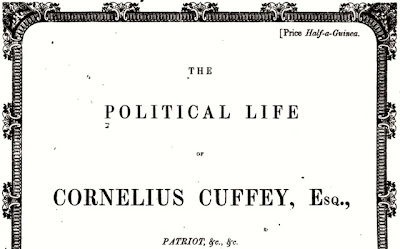